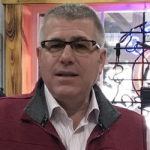 St. Sen. Darren Bailey says he can’t just sit in the Illinois Senate for four more years while the state is poorly managed, so he’s running for governor. The southern Illinois Republican says the people of Illinois have been divided, ignored, mocked, and marginalized.

Bailey says people are leaving Illinois for more opportunity and lower taxes, and the best and brightest shouldn’t be one of the state’s biggest exports. He told a crowd at Jamie’s Outpost in Utica this morning, he’d get people working again, so more of them pay taxes and the state can afford a tax cut in his second year in office.

He says instead of renewing the old budget and building on it, he’d implement zero-based budgeting. Every department would have to justify every line item every year.

Bailey says there is opportunity for Illinois Republicans with Michael Madigan out of his House seat and no longer at the head of the Illinois Democratic Party. WCMY News asked Bailey if he’s sure Madigan won’t still run things with a lower profile. Bailey says we’ll all know soon. He says Republicans can use the opportunities if they get their act together.