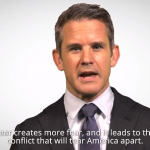 A new video from Cong. Adam Kinzinger in his Country 1st initiative says the Republican Party is currently about scaring people and that needs to change.

Kinzinger explained on CBS’s Face the Nation, Republicans should make the change in their own party instead of just pointing at the same flaws in Democrats. The Channahon Republican says fear can destroy a country. He says he started Country 1st to try to get the Republican Party back to conservative principles instead of being about supporting Donald Trump for Trump’s sake.