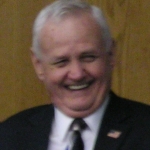 With estimates of around a quarter million dollars to stop leaks and paint the outside of the downtown Ottawa courthouse, one LaSalle County Board member thinks maybe it’s time for a new building. Jerry Myers of Streator says the board should start talking seriously about it. Tom Walsh of Ottawa took the opposing view at the County Board Property Committee meeting Friday. He says even a new building needs maintenance.

The county recently began looking for proposals for the maintenance work. Only one of the five companies contacted provided an estimate. Two said they couldn’t do the work so high up with a busy highway below. Two didn’t reply at all. The possibility that the old paint contains lead and the necessary special handling of a decorative cornice around the top of the building add to the cost. So does the likelihood that much of the work will need to be done on second shifts and weekends to avoid disrupting the courts.

A new building would likely cost tens of millions of dollars. The county would have to borrow money through a bond issue unless it got lucky enough to get a state or federal grant. Myers believes the lower maintenance costs on a new building would justify the building cost.

There would be operational cost savings too. Circuit Clerk Greg Vaccaro says with courtrooms in two buildings, his office has to have a presence at both. And that doubles a lot of his costs.

Myers’ idea is to fill the governmental complex, which currently houses criminal and traffic courtrooms on Etna Rd., with the civil court too. Administrative operations would be moved into a new building east of there. His idea came up during discussion about the downtown courthouse maintenance issues at the Property Committee meeting and was not on the agenda itself to be acted on.