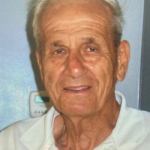 Mass of Christian Burial will be at 11 am, Monday, March 8 at St. Joseph Church in Marseilles, with Rev. Alexander Millar and Deacon Ron Wackerlin officiating. Visitation will be from 9 to 11 am, prior to services, at the church. Burial will be in Oakwood Memorial Park. Ottawa Funeral Home has been entrusted with arrangements.

Joe served in the US Army during the Korean War. He worked for Union Carbide, the UAW Center in Ottawa, and retired from Ritchie Bros. in Morris. Joe was a true outdoorsman. He enjoyed sunny days filled with fishing, hunting, and gardening. He had a special passion training his hunting beagles. Joe was a member of the American Legion and St. Joseph Church in Marseilles.

He is survived by two sons, Gary (Jane) Neurohr of KY and Tim (Jody Riebe) Neurohr of Ottawa; one daughter, Julie (Barry) Bykowski of Ottawa; eight grandchildren, Traci, Jodi, Cheri, Tammy, Kelli, Miranda, Nicholas, and David; and fifteen great-grandchildren. He was preceded in death by his parents; his brothers, Pete, Nick, Frank, Tony, John, and Marty Neurohr: his sister, Barbara Rexroat; and two sisters in infancy.

Pallbearers will be his grandchildren.

Memorials may be directed to the PADS Shelter in Ottawa.