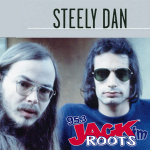 For this week’s roots, we were on a quest to find absolutely perfect music.  It might not be perfect for us (maybe you either) but there are people who think Steely Dan are just that.  And their studio craft is impeccable!  But that doesn’t always mean you’re going to like it.  Really, what it came down to for me was the band losing any sound of grit once it fully became the Fagen/Becker show.  Both of them were fully in control the entire time, but they had actual band members through their first three records.  It was after that point where they gave up touring and solely focused on studio output.

There’s an answer to something Robb brought up during the show at the beginning of the audio Bonus Content which starts with the small red/white/blue logo box under the sound file; whether or not Steely Dan had one of the first Platinum-selling albums.  Plus it leads in to a ‘feud’ they had with the Eagles.

Robb found this article from Aimee Mann (solo artist and former Bass/Singer from ‘Til Tuesday) talking about Steely Dan’s debut record in the Music that Made Her.  It’s the third record down.  Her thoughts on the album and the band really fit in well with our take on them as well.

Next Week:  The Pixies