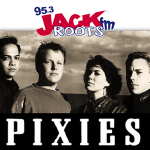 The Beatles, the Stones, Pixies.  If you think one of these isn’t like the other, you’d be right…and wrong.  But when it comes to influencing and changing music, the Pixies belong on that list.  Without the Pixies, the 90s alternative boom wouldn’t have happened.  Just read Kurt Cobain’s comments on their influence on him and ‘Smells Like Teen Spirit,’ or watch David Bowie gush about this band.

Unfortunately, they peaked early.  Both Surfer Rosa and Doolittle belong in your vinyl collection.  Unfortunately, they never reached the stratosphere at their peak powers, mainly because of their own doing.  They hated doing videos, and had many other examples of shying away from the mainstream intentionally.  But it may have paid off in spades.  Even though they didn’t sell millions and millions of records, they became the band that inspired everyone else to start a band.  More on that topic, plus discussions on their 2004 reunion, new music, and a new bass player are part of our bonus content chat that starts at 10:25.

This video tells you everything you need to know about how they felt about making music videos.

Here’s a great documentary on their reunion tour.  Very eye-opening, especially seeing where some of the band members were before they reunited and got back together.  Plus, it’s not too hard to see there was still tension between Kim and the rest of the band.