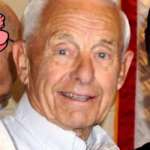 Mass of Christian Burial will be 11 a.m. Wednesday, March 31, 2021 at St. Columba Church, Ottawa with Rev. David Kipfer, pastor officiating. Visitation will be 9 a.m. to 11 a.m. before the service at the church. Burial will follow at Oakwood Memorial Park, Ottawa. Arrangements have been entrusted to the Mueller Funeral Home, Ottawa.

Walter was born on April 14, 1929 in Ottawa, IL. His parents were Frank O. Kistenfeger and Bertha (Hanold) Kistenfeger who immigrated from Germany in 1927.

Wally was an only child. He attended Ottawa Parochial schools; St Francis Parish and St Columba Parish, and graduated from Ottawa Twp High School in 1947. He graduated LPO Junior College (now IVCC) in 1950 with a Pre-Engineering Degree.

Upon graduation, Wally worked at Meckum Engineering, Ottawa, IL as a draftsman. Five years later he was hired by L-O-F Glass Company, Naplate, IL as a Plant 5 millwright. In 1961, he began work at IL Division of Highways (IDOT) where he was appointed District 3 Safety and Claims Representative. He worked at IDOT until retirement in 1990.

On August 27, 1971 he married his wife Ann, and they became a blended family with eight children. Wally enjoyed spending time with his family. They all loved and participated in Ottawa sports activities; including Little League baseball for which Wally coached the L-O-F Cubs from 1961 to 1965. He was a lifelong Chicago Cubs fan.

Wally was a devote Christian and saw the Lord’s presence numerous times in his life. He was a member of St Columba Parish and past Lector and past Eucharistic Minster. He taught St Columba Sunday School from 1974 through 1983 teaching third graders and fifth graders. He was involved in several programs including Christ Renews His Parish, Illinois Valley Cursillo Christian Ministry and the Cursillo Prison Ministry Team in Sheridan Prison. He also volunteered at Community Hospital of Ottawa for many years.

Wally and Ann have enjoyed traveling, visiting relatives and friends, have traveled abroad and around the United States by air, auto and cruise. Wally enjoyed gardening, do-it-yourself carpentry, travel and reading newspapers front to back. Handwritten letters were also a favorite pastime.

They have been Snowbirds to Summerfield, FL every winter since January 1990.

Walter was preceded in death by his parents and his son, Walter Alfred Kistenfeger, Jr in 2003.

In lieu of flowers, memorials may be directed to St. Columba & Marquette Academy and Abigail Women’s Center, Mendota.