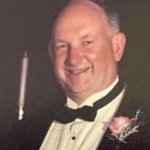 A visitation will be held on Saturday from 10:30AM until 11:30 AM at the Grand Ridge Funeral Home. Funeral services will be held at 11:30AM at the funeral home with social distancing being followed and masks being worn. Burial will be in the Grand Rapids Cemetery in Grand Ridge.

He is preceded in death by his parents, his wife and son, Randy Kates and brother-in-law, Richard Young.

Russell graduated from Ottawa Township High School in 1953 and retired from Thatcher Glass in 1992. He was a member of the Grand Ridge United Methodist Church, Streator Eagles and LaSalle County Farm Bureau.

He was an avid fisherman and a die-hard Cubs fan.

Memorials may be made in his name to the Streator Lions Club Equipment Fund or Grand Ridge Volunteer Fire Department.