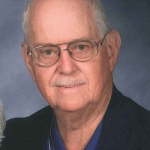 Wayne I. Blakemore, 86 of Streator, Illinois, passed March 30, 2021, surrounded by his loving family in the family home which he built in the early 1960’s.

A visitation for family and friends will be held Saturday, April 3, 2021, from 2:00 pm to 4:00 pm at New Beginnings Baptist Church, Streator, with a celebration of life service to immediately follow.

Wayne and Nancy will be buried together on their wedding anniversary July 6, 2021 at Wolf Creek Cemetery.

Wayne was born to Elmer and Beatrice (Jardine) Blakemore on August 4, 1934 in Streator, Illinois. He graduated from Streator Township High School Class of 1952. Wayne began a 50 year career at Myers Sherman (now Vactor Manufacturing). He proudly served in the US Air Force from 1955 to 1959.

In addition to his wife, Wayne was preceded in death by his parents, a brother Ronald Blakemore and a sister June Blakemore.

Wayne was a avid golfer and a creative woodworker/craftsman having made several items for family and friends. He enjoyed his family and his Golden Retrievers, Murphy and Molly. Wayne was a man of uncompromising character and integrity.