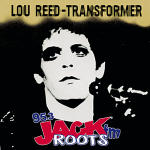 If there’s one thing you take away from this episode, it’s that Robb’s ‘Desert Island’ would be a depressing place.  This album, along with Bob Dylan’s Blood on the Tracks are two of his desert island albums.  I don’t know the rest.  Maybe I should ask him one day on an episode (future show idea!).  If there are TWO things you can take from this episode, it’s that pain and human life experiences combine to make some of the best art.

Enjoy Robb geeking out on Lou Reed, David Bowie, Trainspotting, and all that went in to making this one of his desert island records.

Watch the infamous scene featuring this song from Trainspotting (warning, drug use ahead)

For more on Lou Reed, especially ‘Perfect Day,’ I recommend this 12 minute documentary.