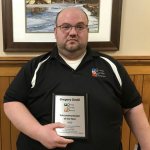 The Ottawa City Council recognized the 911 telecommunicators tonight including the Telecommunicator of the Year announced by Commissioner James Less. And that honor goes to Greg Dodd. The telecommunicators themselves voted for the winner. Less says they wrote that Dodd always shows a good work ethic and is always positive and polite and willing to help others.

Here’s what Less had to say about all the telecommunicators at Tuesday’s meeting.