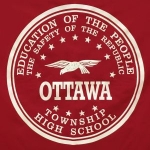 Judge Christina Cantlin has recused herself from a slander lawsuit filed by retired Ottawa High School Teacher Tim Burgess. The case will be reassigned to another judge in the future with the dates still being determined. Cantlin said she knows some of the members of the Ottawa High School District going back to when she was working at her family’s law firm.

Burgess filed the lawsuit for financial and emotional hardships. He claims three teachers who didn’t support the 2009 teachers strike gave information from union meetings to the administration. Burgess was fired for allegedly saying disparaging things in teachers’ union meetings. He got his job back because of another court case.